In May, 2004, Ted, an older man came to the Antiques Roadshow, bringing an old blanket, which his grandmother had said was given to her foster father by none other than the famous Kit Carson of the wild west.

Had he ever had it examined by an expert, the appraiser wanted to know. “Nobody’s ever looked at it that I’m aware of,” said Ted. 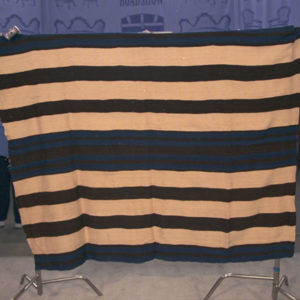 “Well, Ted,” said the appraiser. “Did you notice when you showed this to me that I kind of stopped breathing a little bit? I’m still having trouble breathing here, Ted.”

“It took me by surprise,” Ted said, “because I didn’t think much about it. It’s probably a chief’s blanket…”

“Exactly,” said the appraiser. “But not just a chief’s blanket. It’s the first type of chief’s blanket made…about 1840 to 1860. It’s called a Ute, first phase. It’s Navajo-made for Ute chiefs—Navajo weaving in its purest form.”

He explained that later Navajo blankets had various patterns like diamonds and so on, but this one was just a pure linear design—one of the earliest Navajo weavings. Not only that, he went on to explain, but the condition of this blanket was “unbelievable.”

“It’s made from hand-woven wool,” he said, “but it’s so finely done, it’s like silk. It would repel water. And [it] is dyed with indigo dyes…a very valuable dye at the time.”

Even the one small imperfection was repaired in the 1860s with “raveled bayeta,” which was a very important thing in Navajo weaving.

“ So, all involved,” the appraiser said, “it’s an extraordinary piece of art. It’s extremely rare. It is the most important thing that’s come into the ROADSHOW that I’ve seen. Do you have a sense at all of what you’re looking at here in terms of value?”

The appraiser built the suspense. “Are you a wealthy man, Ted?”

Ted swallowed hard and tried to catch his breath. “Oh!”

“You had no idea?” asked the appraiser.

“I had no idea,” Ted echoed, his voice breaking. “It was laying on the back of a chair!”

“Well, sir, you have a national treasure!”

It was all Ted could do to get out a simple, “Wow!”

“A national treasure,” the appraiser continued. “When you walked in with this, I just about died. Congratulations.”

But the appraiser had more, explaining that this was the value without the Kit Carson connection. If that could be demonstrated, the value could increase by another 20 percent!

How many believers have spiritual treasures “hanging over the back of a chair”? How many people have blessings and divine promises that lie unappreciated? Under-valued, ignored, and unused? Isn’t it time you began to see what you have in Christ? [Antique Roadshow (May 3, 2004)] http://www.pbs.org/wgbh/roadshow/archive/200101A48.html