I have never forgotten the excellent and valuable advice I received from the late Paul Cornish when I was in Seattle Bible College in the late 60’s and early 70’s: “Don’t be shocked by anything.”

In the more than 45 years since then, there have been plenty of opportunities to be “shocked,” often in regards to societal views on sexuality—views related to single mothers, abortion, cohabitation, sexual orientation and more.

In the 50’s and into the early 70’s, an unplanned pregnancy often led to a hastily arranged marriage or a planned “exile” for a young woman. She would visit some distant relative for a time and give up her child in a “closed” adoption. It was assumed she could then “get on with her life,” never grieving the loss of the child she had carried.

Abortion, legalized in 1973, changed that formula. Then people began to celebrate movie stars who had children outside of marriage. These and other trends began to change the norms and expectations of society. According to the Centers for Disease Control, 39.8 percent (nearly two of every five) of 2016 births in the US were to unmarried women.1

Over the years, views on divorce has also shifted. It became a major area of discussion in churches—and even at conventions: “What can be done? Can a divorced man serve on the church board?”

The answers were complicated by varying circumstances. “Was he divorced before he was saved? Has there been appropriate penance? Who initiated the divorce, him or his wife?”

Now the question seems to be, “Can we find someone who is married—regardless of the number of times—and is not cohabiting or gay?” Today, even many divorced and remarried pastors serve at various levels of ministry.

Just as troubling, over half of all couples who marry in the U.S. have cohabited prior to the wedding. Over 50 percent of those who cohabitate never actually marry, so even though they cannot be a divorce statistic, any separation will still be emotionally painful—especially if there are children involved. The sad reality is that while the presumed reason for living together is to determine marital compatibility, the rate of separation is significantly higher for these couples.4

Human sexuality is one of the most powerful forces in our psyche. God created us as sexual beings, and that desire has maintained the species until this day. We don’t like to think of our parents as sexually active, but they were—or we would not be here.

David was driven to murder because of his sexual escapades. Solomon, who was considered the wisest man to live and had some of the most powerful encounters with God in the Old Testament, was nonetheless led into idolatry by his wives. The list of examples is long.

In Romans, the Apostle Paul records the path from a natural, God-given sexual desire and its fulfillment to the point where God allows humans to depreciate themselves into unnatural relationships. We have to wonder if the rapid move to confusion over sexual identity—a hallmark of the current generation—is not God giving us over to our own lusts and desires.

I would submit that the destruction of the sanctity of marriage in our western culture has been nothing less than an attack on the picture of God’s relationship with his people. That, in turn, has undermined the message of the Gospel. Our homes, called to be an illustration of love and submission to one another, no longer reflect the love, care, and protection of our Lord. 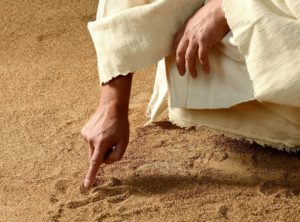 It is only when we take the call of Jesus seriously that we are able to fulfill his call for each of us. Unless we take up our cross and die to our own pride and selfishness, we will never be a good marriage partner or an example of Christ in our home. Unless we are willing to forgive as we have been forgiven, we will not be able to find joy and peace in a relationship with a spouse.

So how do we respond to the challenges in our homes and churches?

In our hearts we know we will not solve the problems politically—even as we try petitions, letters, and protests. Our problems are spiritual at the base and, as such, require a spiritual response. When confronted with the challenges of the day, we demonstrate the spiritual nature of our response, whether we are condemning or compassionate, judgmental or gentle, or whether we snarl or weep.

When I was in Bible School studying under Paul Cornish, my “mantra” for a ministry response was how Jesus responded to the woman caught in adultery. I would suggest that is the appropriate response we need today.

Jesus did not condemn the woman, and we don’t have to condemn her either. But sadly, some forget the last part of the verse. Jesus said, “Go, and sin no more” (John 8:11). We are loved by the Father too much for him to leave us as victims of the sin that will destroy us. New life means turning away from sinful behavior.

If we have compassion for the sinful, desperate condition of people, it will affect how we relate to them (and them to us). It will determine how effective we will be in seeing them come to Christ.

John D. Sprecher, Lead Elder of the U.S. FCA, was a pastor for more than 45 years, most of that time in Rockford, Illinois.