Preaching To a Divided Congregation

Preaching To a Divided Congregation

Politics has always been a divisive issue in nearly every country and context. Typically in a democracy, parties are in power for a season, and then replaced by another.

The difficulty for pastors comes when their congregations include well-meaning people on all sides of the political spectrum. The difficulties increase dramatically when one side claims their views represent the only “Christian” option. Announcing that and expressing their opinions can separate even good friends.

Granted, there are galvanizing issues (like abortion) that become a litmus test for some. But what about other issues that could legitimately have multiple responses by Christians? What’s a pastor to do when some of the flock argue, for example, that justice is a law-and-order issue while others argue that justice is an issue of compassion for the disenfranchised and the helpless?

The pulpit has long been a powerful voice in our culture when it is focused on the truth of the kingdom of God. In the United States, independence as a nation, the abolition of slavery, and the beginning of the Civil Rights Movement have all been rooted in the church. Change came not so much from the perspective of a political party, but from the principles of self-determination—and the premise that all are created equal in the image of God.

Political power is fickle. It holds sway as long as the party is in power. But only changed hearts can change society from the inside out.

Preachers have the opportunity to bring the message of the Gospel into every context—when we understand our common need of a Savior and the hope that he brings. Jesus died on the cross for every person regardless of ethnic background, social standing, age, sex…and the list goes on.

It is by trusting that the blood shed on the cross was sufficient to cleanse us from all sin that we are placed in the family of God. As believers, we receive very simple instructions from Jesus about how to live together: “Love one another. As I have loved you, so you must love one another” (John 13:34).

When we seek the best for everyone, it may affect our political views. More importantly, however, it will cause us to value other members of the body of Christ so we will more concerned about their welfare than concerned with judging their political views.

Let’s create an atmosphere in our churches where we are more concerned with righteousness and being members of a kingdom not of this world (John 18:36)—more than we are concerned in simply being right. 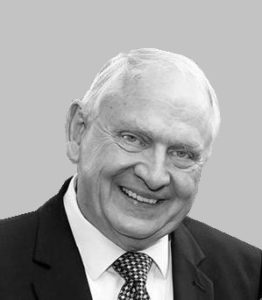 John D. Sprecher, lead elder for the U.S. FCA, pastored churches for 45 years, most of them at Rock Church in Rockford, Illinois. Posted 8/31/2018.