“I have never before been able to be in a classroom to be taught myself.”

It’s a remarkable statement—made more remarkable because it was given by an influential pastor of an African church with 10,000 weekly attenders. Though his ministry of 35 years has obviously been anointed by the Spirit, he still longed for the opportunity to be personally refreshed, to be taught, and to study. 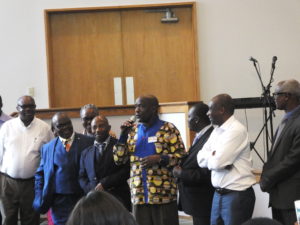 Ministers and leaders from several nations attended the leadership conference held in late July. Most were from African nations—Gabon, South Sudan, Rwanda, and the Democratic Republic of the Congo (including several from the DRC now residing in Canada or the U.S.).

The conference organizer, Pastor Justin Byakweli has conducted leadership conferences every two or three years since 2008. “My goal,” he said, “is to help leaders who are ministering on the frontlines.” For several years Bethel Christian Fellowship has partnered with Byakweli to conduct the conferences, providing teachers, facilities, and housing for those who attend.

Byakweli noted that many of those attending are the “walking wounded,” needing healing even while they continue to fight on the frontlines. “They are ministering to suffering people while they themselves are suffering,” Byakweli said. “I want to pull them aside and put them in the ‘clinic’ to receive healing so they can go back out on the frontlines.”

Dr. Justin Byakweli (L), pastor of International Christian Fellowship in St. Paul, greets conference participants alongside Associate Pastor Mike Birindwa, who did much of the translation work for the conference.

Most of the conference participants were church leaders, though some were also national leaders. One was a leader in the Catholic Charismatic movement in the Congo. They came hoping to learn practical leadership skills to increase their influence, not only in their churches but also in their communities and countries.

The conference theme, “Christian Ethics and Advocacy,” emphasized the need to provide influence for those who have none. Byakweli recalled how the prophet Jeremiah ministered during a time when religious leaders were silent, though the nation of Israel was in decline and under attack.

The circumstances then parallel today’s challenges. “Many people adapt to the difficult circumstances of our day and fail to stand for what is right,” he said. “We need leaders who will be a voice for the voiceless. Being quiet is not an option.”

Richard Cunningham, provided the conference attenders with foundational leadership training. Other presenters included Dr. James Olson, former pastor of Bethel Christian Fellowship and now president of the Pilgrim Center for Reconciliation. He offered conference participants a picture of the “goal” of the kingdom of God—Shalom in all its dimensions—with a clear process of the change agency necessary to move towards that goal. 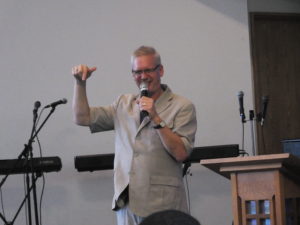 Dr. James Olson spoke on the Shalom aspect of the kingdom of God.

“The challenges addressed in the conference are universal,” Olson noted, “but the African context, and perhaps especially the DRC, present some unique challenges to Christian leaders, both those in public and secular positions and those in the church.”

Another presenter was Dr. Steven Rasmussen, missionary and current pastor of Bethel Christian Fellowship. He was impressed with caliber of leadership among delegates from the DRC and the fact that they paid their own way to attend.

Rasmussen was also impressed with stories from the participants themselves. Two have worked for the 22 years toward reconciliation following the Rwandan genocide. Some have had to deal with corruption in business and government in the DRC. One, once a “lost boy” from South Sudan, is now working with theological education in Nairobi. 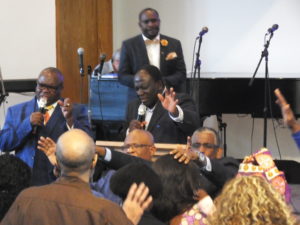 Prayer, renewal, and spiritual encouragement were key components of the conference.

Rasmussen, who spent more than 20 years in Africa, addressed the problem of witchcraft in African culture. “I was impressed with the how some of these leaders have fought for those falsely accused of being witches,” he said.

Byakweli is planning the next conference for 2020, and many pastors have already been sending requests to be invited to it. Nonetheless, Byakweli has kept the size of the conferences manageable, limiting attendance to match available resources.