[Editor’s note: This plea from Canadian pastor and elder, Roger Armbruster, speaks not only to Canadian concerns but also to matters pertaining to all people—wherever reconciliation and healing of relationships are needed.]

I think it is time for me to speak up. I do not pretend to have the final word on what is the way forward for the pathway to reconciliation between the First Peoples of the Land and other People Groups in Canada, but it is clear to me that the present-day crisis requires that Canadians can no longer ignore the First Nations issues. The issues revolve squarely around the entitlement to land and its development or non-development of natural resources in either a responsible or an irresponsible manner.

Where is the prophetic voice of the church in all of this? Sadly, too many in the church have been waiting to go to heaven and meanwhile have little to nothing to say now about land issues, about who owns the land, or about the healing of the land from a biblical perspective. The one empirically proven fact is that the world of Nature is incapable of being God and is in need of healing. Hence the need to look beyond the natural and into the supernatural realm for answers.

My perspective is that no man or woman has ownership of the land. Rather, the Creator of heaven and earth is the Owner and Possessor of heaven and earth and has placed human beings in different parts of the earth as stewards and managers of his property, his good earth, and his natural resources. (Genesis 1:1; 14:19; Leviticus 25:23; 1 Chronicles 29:11, 12; Psalm 24:1; 1 Corinthians 10:26, 28.)

Deuteronomy 32:8 and Acts 17:24-29 make clear that the Creator of heaven and earth placed different nations in different parts of the earth. He established their boundaries so men and women would seek his face from within those boundaries and find him, because he is not far from each and every one of us, and because it is in him that we live and move and have our breath.

Therefore, the Indigenous peoples of every piece of land and property on planet earth were entrusted with the task of stewarding the earth on his behalf and finding him within their own territory so that (after the Tower of Babel), they would also reconnect with other nations from whom they had become alienated and estranged and find God, so that true reconciliation between all people groups could take place.

This coming together of the nations who had been confused and scattered at Babel was reversed at Pentecost (Acts 2:7-12) and will culminate at the end of time when the people of every tribe and nation will be of one accord, each worshiping the Creator in their own ethnicity and their own heart language. (Revelation 5:9, 10; 7:9, 10.) 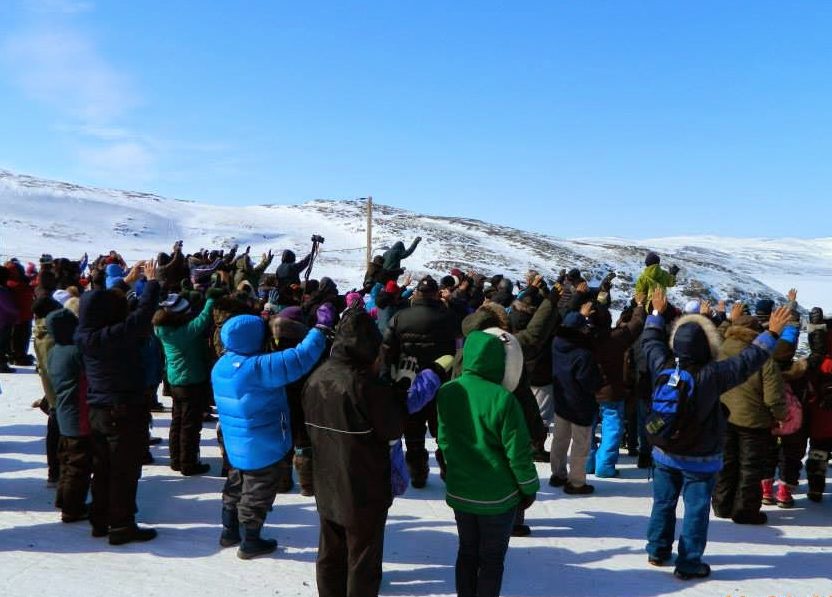 Healing the Land in Salluit

Within the context of the nation-state of Canada (now comprised of many nations, languages, and ethnicities), the Inuit, First Nations, and Metis have a critical role to play in the healing of the land. They have giftings and graces we all need in order to be healed, but before the reconciliation can happen, there needs to be unity between indigenous churches to speak with one prophetic voice. That voice will draw a clear distinction between the biblical healing of the land with the worship of the Creator and the promotion of environmentalism as a religion, and the worship of the creation.

The early missionaries taught us to receive Christ in order to go to heaven after we die, but they did not teach us to redeem the land or to see the healing of the land, rooted in the healing of human relationships. People and land are inseparably connected.

If you wonder how to differentiate between the biblical healing of the land vs. environmentalism as a religion, please take a look at the comparison below which I prepared some 10 years ago after doing a number of “healing the land” processes in Canada’s far North.

I would appreciate any comment or feedback you might have, whether you are Inuit, First Nations, Metis, or Caucasion—or any other people group. This is the time for the Church, the Ekklesia, the House of Prayer for all nations to arise!

Roger Armbruster is pastor of Maranatha in Niverville, Manitoba.

NOTE: An academic analysis of Armbruster’s “Canada Awakening Ministries” was done in 2010 by two university professors (Frédéric Laugrand and Jarich Oosten) recognized the relevance of healing the land as it relates much better to indigenous peoples than secular scientists lacking a spiritual dimension. You may review the study HERE.