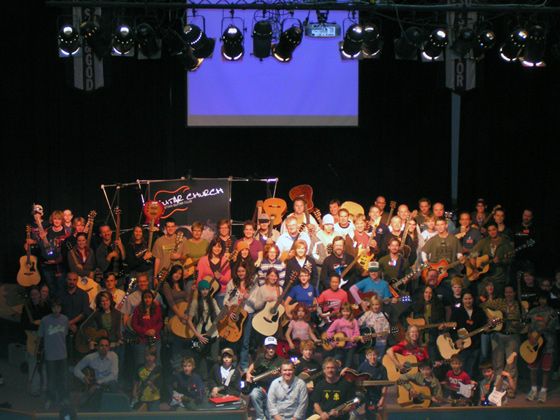 More than 1,600 gospel music fans showed up in the tiny town of Floyd, Iowa (pop. 360) the weekend of September 5-6, 2008 as Gospel Lighthouse Church held its free outdoor festival in the community bandshell. Lawn chairs and blankets were spread far and wide to hear more than 25 groups from 12 different states as far away as Texas and Oklahoma.

“We began this event back in 1995, and it has grown every year,” says Pastor Paul Phillips. “On the weekend after Labor Day, we start at 10 in the morning and go till 10 at night, with just an hour break for lunch and dinner. Otherwise, it’s one group after another, giving their song and testimony in 20-minute segments.”

This year on Friday night, rains forced the event into a nearby gymnasium, cutting the crowd to 500. But listeners were back in full strength on Saturday, when the weather was great.

A Michigan singer named Brett Bromley of the group Northern Edge said about this inspiring event, “Everyone walking by, whether they know Jesus or not, gets to hear about him.”

To see a full schedule, go to the Floyd Lighthouse website and click on “Music,” then “2008 Gospel Sing Groups.”