A Great Man Lived Among Us

Jack Whitesell was a man much appreciated among Canadian pastors and churches of many denominations. My earliest recollections of him were during my childhood. Both Jack and his beloved wife, Olive, had roots near my hometown.

Jack spoke several times in my childhood church and taught in the Bible college I attended. His biblical insight was inspiring to me, even as a young person. I recall his brief foray into biblical archaeology, a subject that fascinates me.

The leadership of the last three churches I have pastored have all benefited from numerous consultations with him on church growth. Jack was animated in his handling of these sessions. The possibilities he envisioned for God’s church brought new vision to us leaders. His love for God, the church, and his “outbound” philosophy translated into fresh anointing and action among our leaders and members.

Jack never had time for retirement. I recall him saying, “As long as God’s call is upon you and the church is moving forward, you are good to serve until you are 80 years old.” It is obvious that he practised his own preaching. I can say without reservation that we are richer today because Jack came to our town.

Farewell, Jack! We love you and thank God for you. The dream you shared is still alive!

They call it a “Tea Party,” but actually it’s a full evening for women from the community in and around Floyd, Iowa, a small town 30 miles south of the Minnesota line. It all began when the Friday morning ladies’ group at Gospel Lighthouse Church began praying for a way to reach across religious and social lines.

The event starts with seating guests at tables for eight, each of which has two Gospel Lighthouse hostesses to welcome them warmly. Food and door prizes are then followed by a time of worship, special music, and a testimony from a local woman.

But that’s not the end. An extended prayer time at the tables gets underway, the hostesses asking if anyone has a special need. They then lead in prayer for whatever is mentioned. Eventually the hostesses pray a prayer of blessing over each visitor. “There are many tears,” Dixie Phillips reports. “The masks come off, and women begin their spiritual journey around those tables.”

The “Tea Parties” met first in a Mennonite tea room, then grew to use the local library’s meeting room. Even that proved not to be big enough, so the church rented a banquet hall at a local motel. Again the attendance grew too large. Finally, Gospel Lighthouse’s fellowship hall was completed, providing adequate space for the outreach.

“We work very hard to make each guest feel loved and comfortable,” says Dixie. “It is just amazing for me to stand back and see God move among the most unlikely women.” 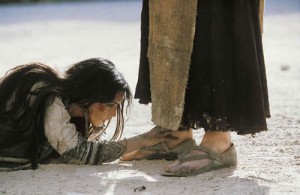 “Pastor,” a desperate voice wavers over the telephone lines. “Uh, I have to resign from the elder board.”

The tension is palpable. “Amanda’s pregnant. She told us over supper,” the father continues. “I really don’t see any other option, knowing the rules for elders ordering their own households.”

This is a scene not unfamiliar to senior pastors. The young woman in question could be a junior Sunday school teacher, a newly minted worship leader, or even the best friend of the pastor’s eldest daughter.

The next few weeks and months will be spent making decisions, adjustments, and choosing private and public attitudes towards this unseemly situation.

Does anyone care about the father of the coming baby (other than to learn his identity)? Does he escape all shame? All guilt? All financial responsibility? In this era of “equal opportunity,” can an attitude of complacency toward the young man be considered fair? Christian, even? Furthermore, what kind of support is offered to the parents who are plunged into a morass of confusion and rage?

If we as church leaders fumble the ministry requirements at this moment, we will leave scars for a lifetime. My father, then in his 80’s and a long-time elder in a flagship church, wept as he related how his pastor had once made his son confess his premarital romp, which resulted in an unplanned pregnancy, to a Sunday morning congregation. He felt it was a cruel and unusual punishment for an 18-year-old. While such public excoriation may no longer be practiced, I am personally acquainted with a beautiful young woman whose youth pastor not long ago was cool to the point of hostile when he became aware of her predicament. No support, prayer or otherwise were forthcoming.

We are called to be a healing presence in a world battered by sin and evil. The story of Christ’s quiet confrontation with the uptight, sneering Pharisees and the humiliated woman “caught in the act” comes to mind. Glaringly absent was the male partner in this setting. Things haven’t really changed in two millennia.

The reaction of Christ is worth noting. He bent down and scribbled in the sand. He drew a line and then asked the accusers to reflect on their own shortcomings. Today we are likewise asked to choose on which side of the line we will stand. Will we be remembered for condemnation or grace?

A Friend For Christmas

At least 150 at-risk children in the Lake Elsinore area of Southern California got a positive Christmas experience on Sunday, December 14, thanks to the efforts of FCA missionary pastor Mona Davies and her husband, Morris. Their Angel Tree Christmas Party drew support from all across this community (40 miles south of San Bernardino on Interstate 15).

Elks Lodge paid to rent a large entertainment center for the occasion. A free lunch was sponsored by the Rotary Club of which Mona is the current president. Dozens of individuals and businesses donated a wrapped present for each child based on size, gender and other information they had gleaned from Angel Tree tags at more than a dozen public places, from doctors’ offices to fitness clubs to senior apartment complexes. “In fact, there was a surplus of gifts,” Davies reports. “We are still giving them out to needy children in the Temecula, Murrieta and Lake Elsinore Valley.”

The children—prisoners’ kids, those in foster care, some whose families are truly homeless—were the center of attention from 11:30 a.m. until 2:00 in the afternoon. They got to do arts and crafts; some got their faces painted. Everyone watched a puppet show that presented the Christmas story from the Bible, with a clear gospel opportunity at the end. They laughed and ate and opened their presents, while adult volunteers from all walks of life attended to their every need. A city councilwoman pitched in to help, as well as police officers and local teachers.

“We call our work Community Outreach Ministry,” says Davies, “because we seek to demonstrate the love of God by expressing our faith in action. Statistics tell us that the children of prisoners are 66 percent more likely to become the next generation of inmates. We want to keep that from happening.”

Other efforts of the ministry <a href=”http://www.communityoutreachministry.org” target=”_blank”>http://www.communityoutreachministry.org</a> include year-round mentoring for youth as well as sponsoring teens to attend FCA summer camps. The Christmas event this year attracted advance media coverage, including a spot on “CNN Headline News” that ran repeatedly for two days throughout the Southern California market.

“We believe this kind of work is significant,” says Mona Davies, “because it lets the children of prisoners and other at-risk kids know they are not alone or forgotten. Jesus cares about them, and so do His people.”

Fitting into the Bigger Picture

When the 350 or so people entered the sanctuary of Christian Hills Church in Orland Hills, Illinois last on November 16, 2008 for the installation of their new pastor, ushers handed each of them a jigsaw puzzle piece. They knew Pastor Mike McCartney had a creative streak, but what was this all about, they wondered.

The commissioning for ministry was led by FCA National Coordinator Warren Heckman, who had served Christian Hills as a part-time interim pastor up until this service. He was joined for the dedication prayer and laying on of hands by Pastor George Thomas, elders, deacons, and other ministry staff members. People in the pews held their puzzle pieces patiently.

McCartney’s message this inaugural Sunday was entitled “God Has a Plan,” based on the familiar text of Jeremiah 29:11-14. “Each of you has a place to fill in God’s larger picture for Christian Hills,” he said. “Let’s work together to fit each member of this body into the role for which we were designed.”

McCartney and his wife, Kathy, are not new to this congregation; they served on the pastoral staff during the mid-1990s. Now, after pastoring in Amery, Wisconsin, for 11 years, they are returning to the Chicago area for this senior pastorate. They will lead a staff that includes four associate pastors plus the K-8 Christian school faculty and administration.

Christian Hills Church traces its 80-year history back to the South Side of Chicago, where it was known as Wittich Memorial Church. In the 1970’s, when they bought 40 acres of cornfield in a southwest suburb, they had few neighbors. Today there are rooftops in every direction.