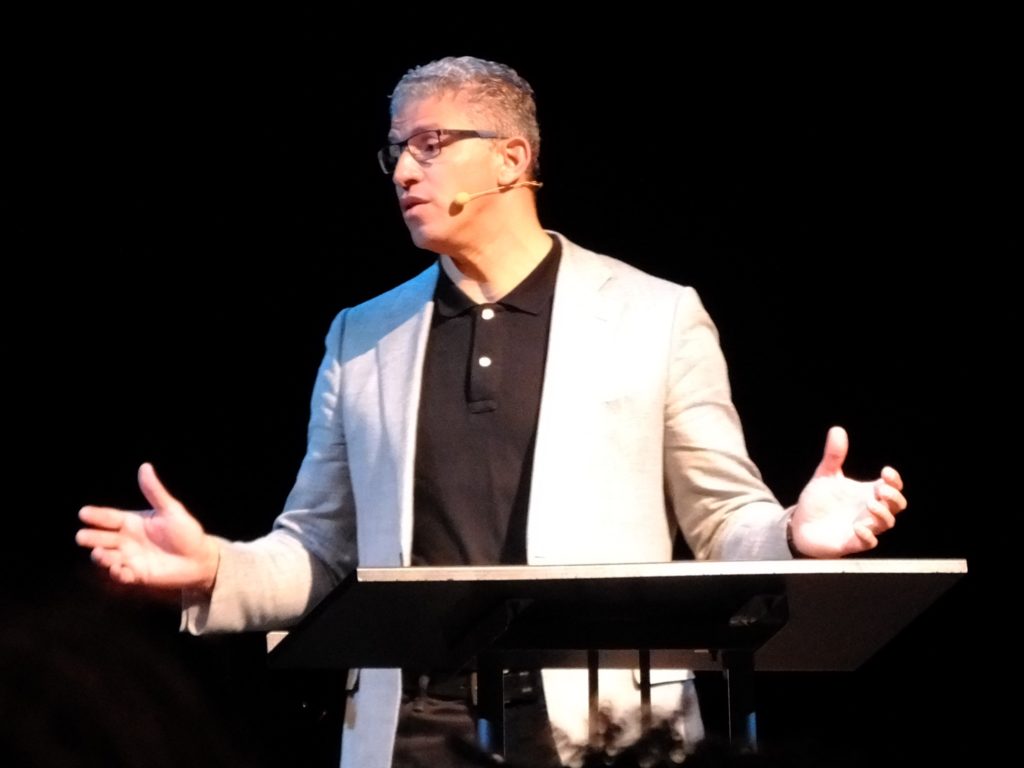 On Thursday, the last night of the 2017 US convention, Al Toledo, pastor of the Chicago Tabernacle, shared about the power of the invitations given to us by God. He highlighted three invitations from John 15:15-16:

I no longer call you servants, because a servant does not know his master’s business. Instead, I have called you friends, for everything that I learned from my Father I have made known to you. You did not choose me, but I chose you and appointed you so that you might go and bear fruit—fruit that will last—and so that whatever you ask in my name the Father will give you.

Toledo reminded us of God’s invitation to us…

“When you’re friends with God,” said Toledo and you know you’ve been called by God, you can ask for gigantic things!” God uses the combination of all three of these invitations to work in and through us. 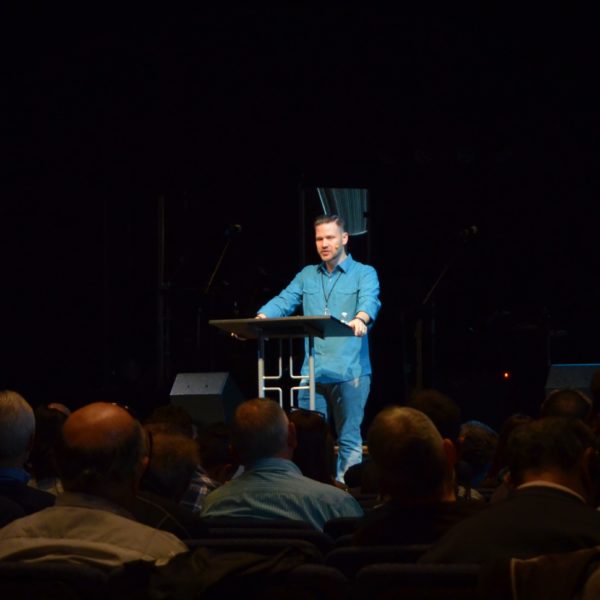 This morning we heard from two young leaders in our fellowship who shared about the importance of having an overflow of God in our lives that impacts our lives and ministries and lasts for generations. 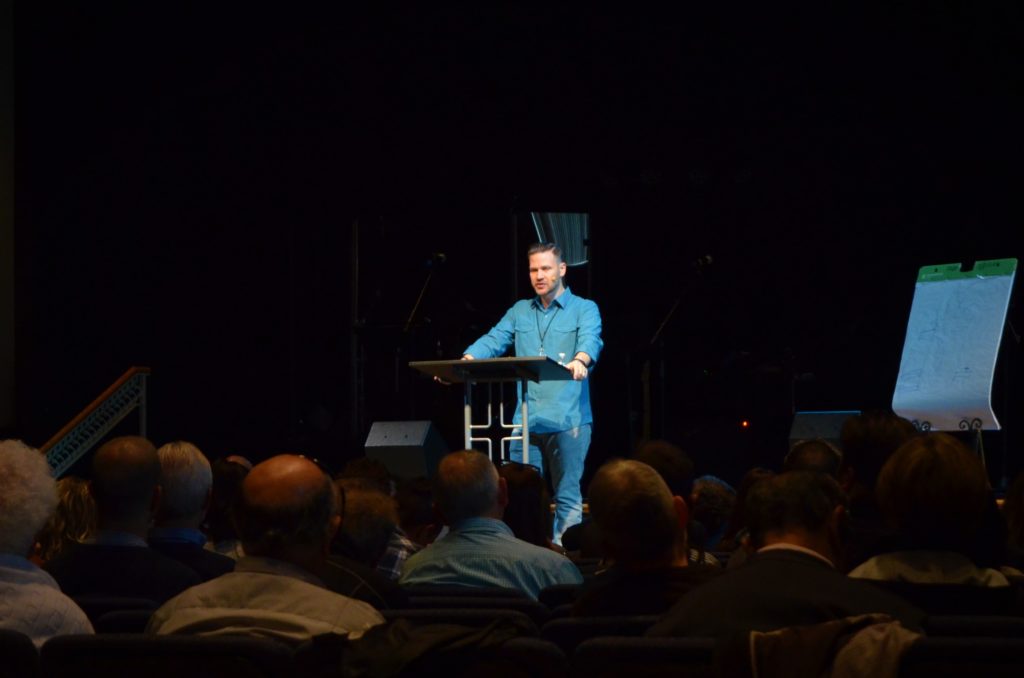 Daniel Johnson, Associate Pastor of Gracepoint Gospel Fellowship, reminded everybody that “In the Kingdom of God ‘Just-Enough’ is not enough. God wants to give you an overflow!”  He went on to elaborate that we are called to minister out of the overflow of what God is speaking to us, of who God is in us, of His word, and of what God has done and is doing in our lives. If we minister out of the overflow we won’t run dry or burn out! 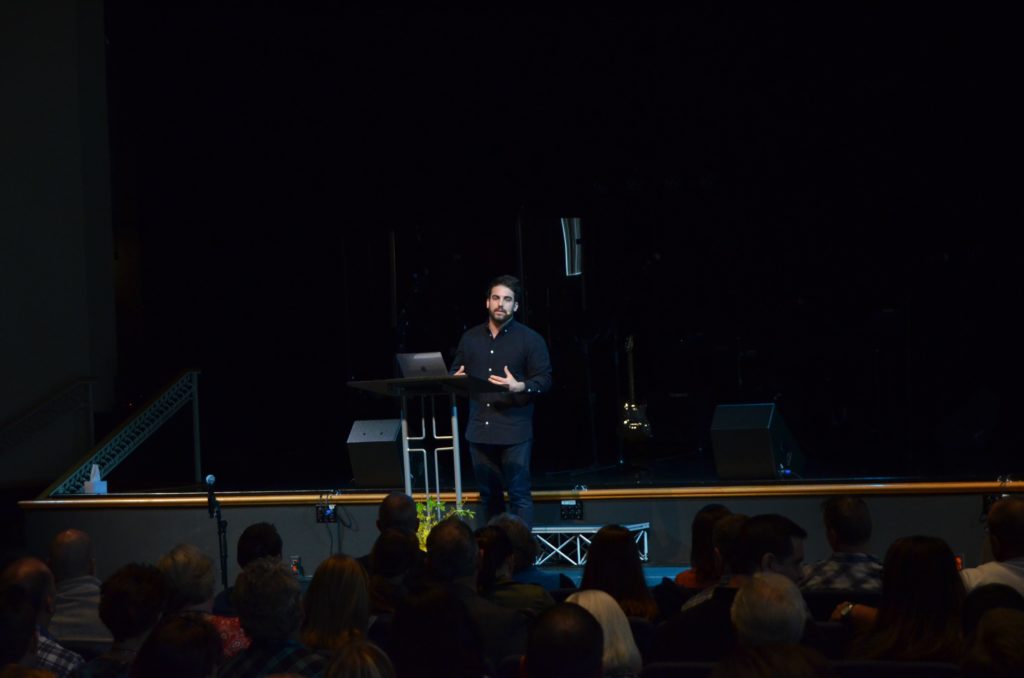 After a brief break for fellowship and snacks, we jumped right back into it with Stephen Zarlengo, Young Adults Pastor at Smithtown Gospel Tabernacle. Stephen shared that the idea of generations isn’t something humanity created but is a reflection of the Trinity;  something between the Father and Son. It’s out of that overflow that we came into existence. As the church, we need all generations in order to be the proper reflection of the Father. As we value each generation and what they bring to ministry as we work together we will be able to go above and beyond from generation to generation. He left us with this challenge that the roof of the older generation’s lives would become the floors of the younger generations so that we may take the kingdom to a new level.

I ENCOURAGE YOU TO FOLLOW ALONG ON THE BLOG, SOCIAL MEDIA AND ON THE LIVESTREAM IF YOU ARE NOT ABLE TO BE PRESENT…AND JOIN THE CONVERSATION ONLINE: WE’LL BE USING THE HASHTAGS #FCACONVENTION AND#OUTOFTHEOVERFLOW THROUGHOUT THE WEEK SO THAT WE CAN ALL BE PART OF WHAT GOD IS DOING IN US AS A FELLOWSHIP AND AS MINISTERS.

Day 3 – Anointed for a Purpose 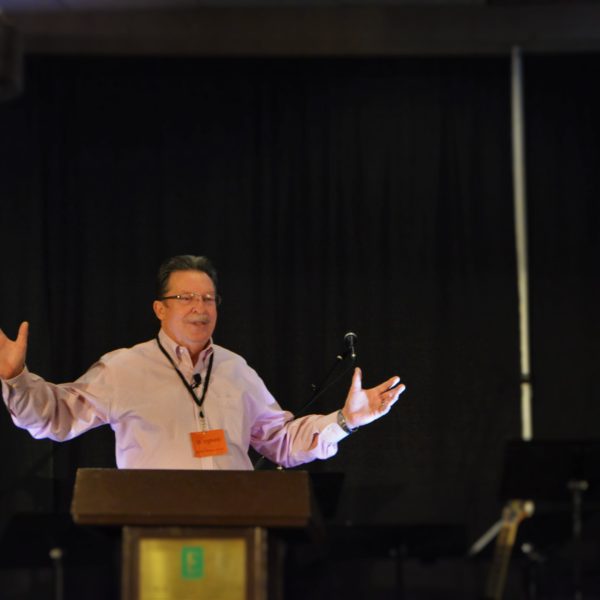 [Update: You can now view the main session videos HERE!]

Day Three of the FCA USA National Convention was a powerful day of growing in our understanding and experience of the purposes of the anointing!

Dan Hammer started us out by reminding us all that we’ve been “Anointed for a Unique Purpose.” Jesus Himself was anointed for a purpose (Isaiah 61), and just as the Spirit of the Lord was upon Him, the same Spirit abides within us. Because the anointing is upon us, we have the authority to proclaim the promises of God to His people! Dan shared with us the ‘recipe’ for the anointing, as spelled out in the book of Hebrews along with fun stories of walking in the anointing as he has seen in his life as he has continued to allow the Father to fashion his heart afresh for His glory.

There were powerful workshops that morning as well as lots of time connecting with others that afternoon. That evening the Heritage Committee honored two couples for over thirty years of ministry: 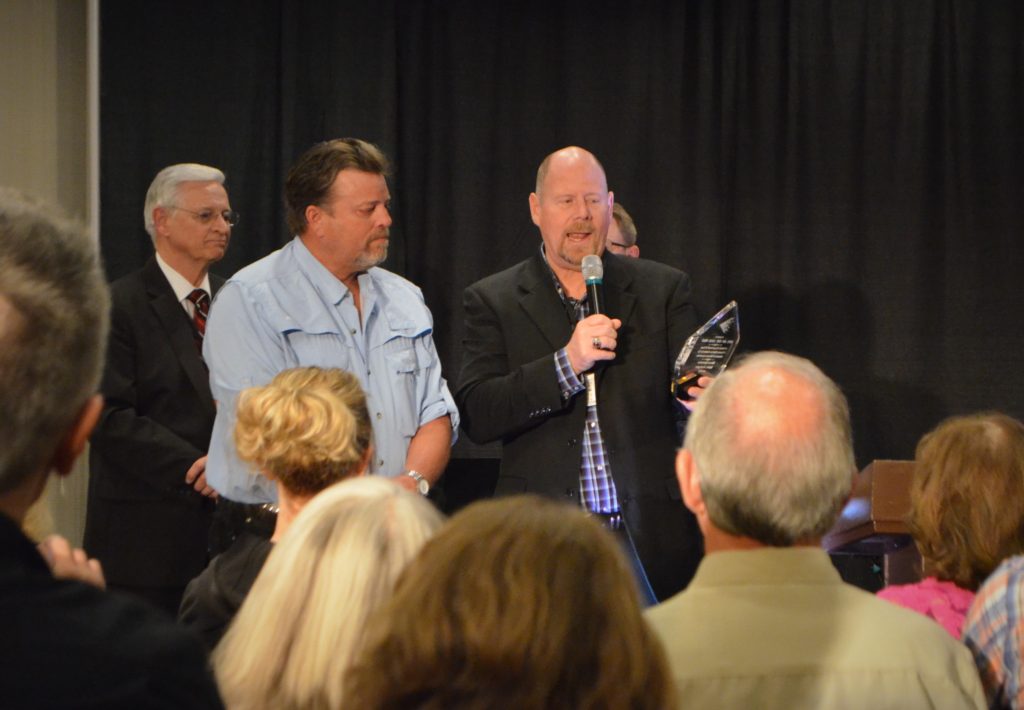 (their son Doug accepted the recognition on their behalf as they were not able to attend due to unexpected health issues but they joined in via livestream). 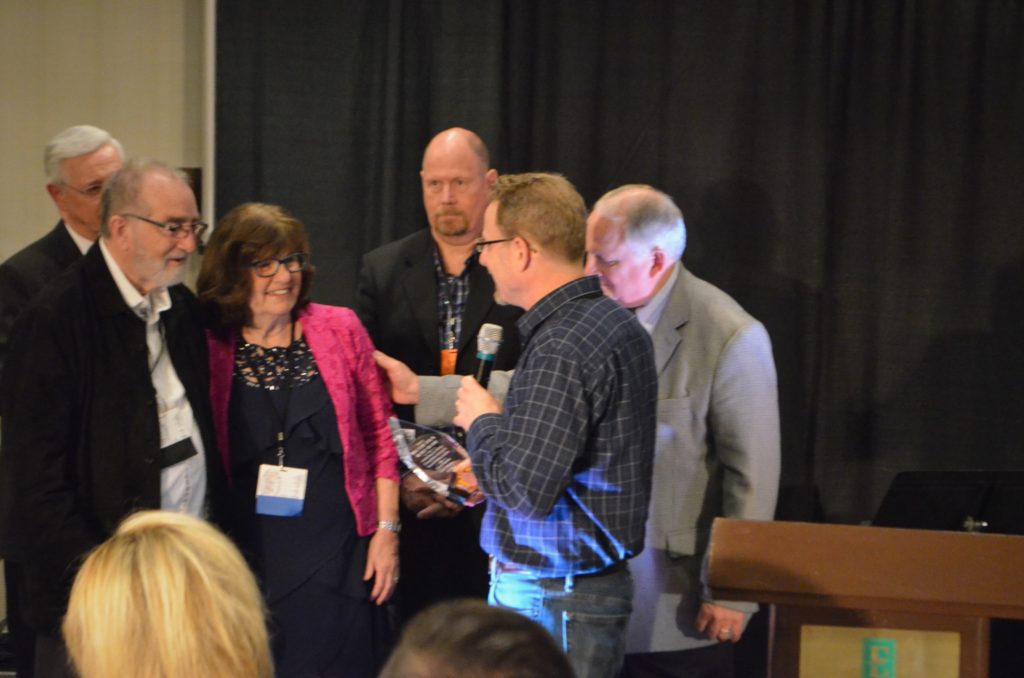 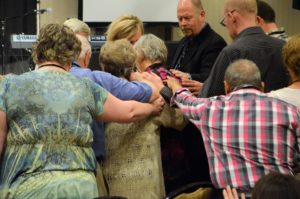 The names of those who have gone on to be with the Lord during this last year were also read, including the names of Bob Finke, whose wife Marilyn was present and received prayer for strength as she continues on in ministry throughout South America, and of Scott Volz and Ed Pohlreich who recently died in a tragic car accident in Uganda. Brenda Volz and Marci Pohlreich shared from their heart about the last few weeks and about their determination to continue the work they have been involved in to see the Kingdom of God continue to advance in the nations.

Dr. Stephen List was our speaker that night and he encouraged us from Luke 4:18 & John 21.

The same Holy Spirit that anointed Jesus has anointed us, not just for ministry but for LIFE! 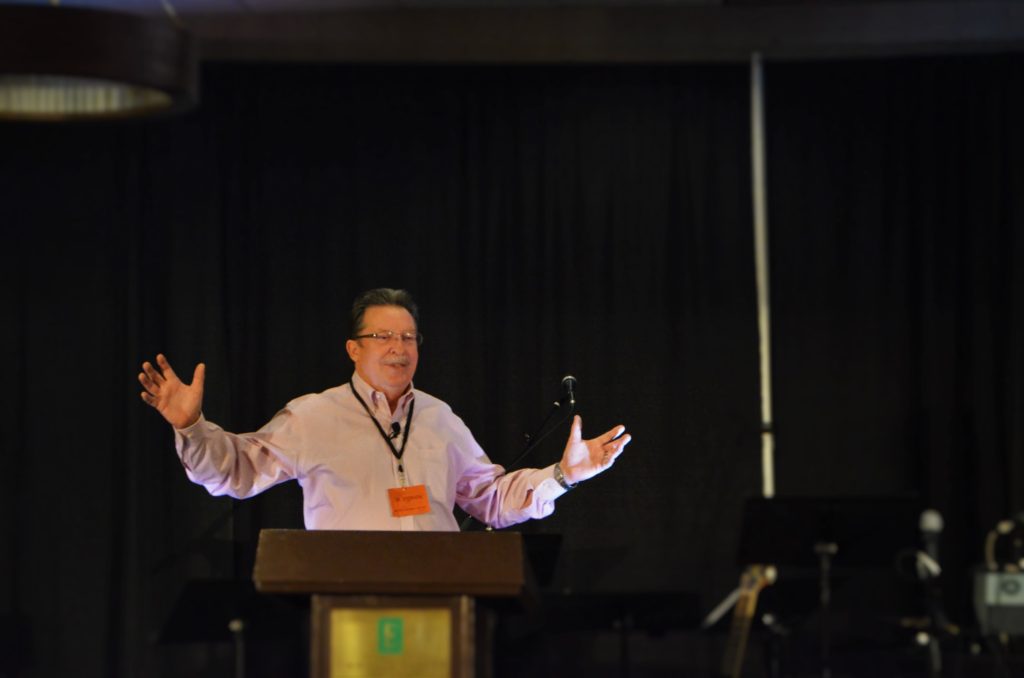 John 21 tells of the time when Peter and some of the other disciples went back to fishing after the resurrection. Their supplier was gone so they went fishing to provide for themselves. They did something that they knew how to do yet they had caught nothing all night. Jesus told them to cast the net from the other side even though they were the ones who “knew what they were doing.” He was saying, “children, shift over!”

God will ask you to do things that don’t make sense, that aren’t logical, but you will know that it’s God! We are coming to the end of an era. Things that had worked in the past don’t work anymore. Those things served their purpose but it’s time to shift! The Holy Spirit is being poured out all over the world but it’s not according to the old ways. Don’t jump out of the boat. Don’t drop the net. Just make the shift God is telling you to do and throw your net on the other side! We are on the brink of an outpouring of the Holy Spirit in this nation and it’s not tied to anything else. You’re not too old to change how you’ve been doing things. God can help you change.

It was daytime and the time for fishing was over but they got the biggest catch because they listened to what Jesus told them to do…even when it didn’t make sense! God has anointed you for living. That’s every day. Every hour. Everything you’re doing. God has things in store for you that you’ve never even dreamed of! Don’t get stuck thinking “I’m just who I am and I can’t do any better.” Step into the divine realm. It’s not far from where you are but you must be willing to make the shift. What God will heap on you will be greater than what you think your capacity is to handle, but don’t worry, you’re net won’t break. He will give you the capacity to handle it.

Trust the anointing that God has already put in you. He has anointed you for a purpose! Walk in boldness and authority into the things He’s calling you to. Stay in the boat, keep the net, but cast it where HE is telling you to cast it!

Conventions Are Just Around The Corner! 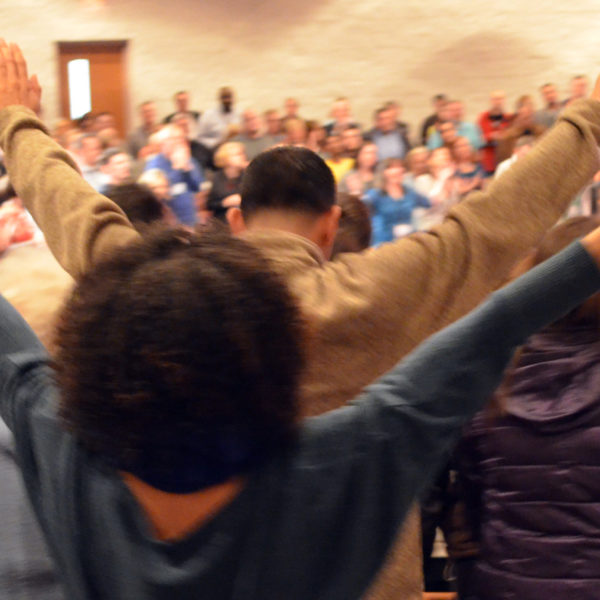 We’re heading into a great season of receiving great information, fresh impartation, and powerful transformation as we come together for our National Conventions in April in the USA and in May in Canada. It will be a great time of connecting with God and with each other to advance God’s Kingdom together! 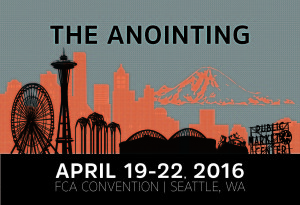 First up is the USA convention in Seattle beginning next Tuesday and concluding at noon on Friday. There are some great speakers, workshops, and activities lined up. I know the crew in the Northwest have been working very hard to prepare for this wonderful time together and are looking forward to hosting all of us. It’s going to be great!

I encourage you to follow along on the blog and on social media if you are not able to be present…and join the conversation online if you ARE present. We’ll be using the hashtags #fcaconvention and #theanointing throughout the week so that we can all be part of what God is doing in us as a fellowship and as ministers. 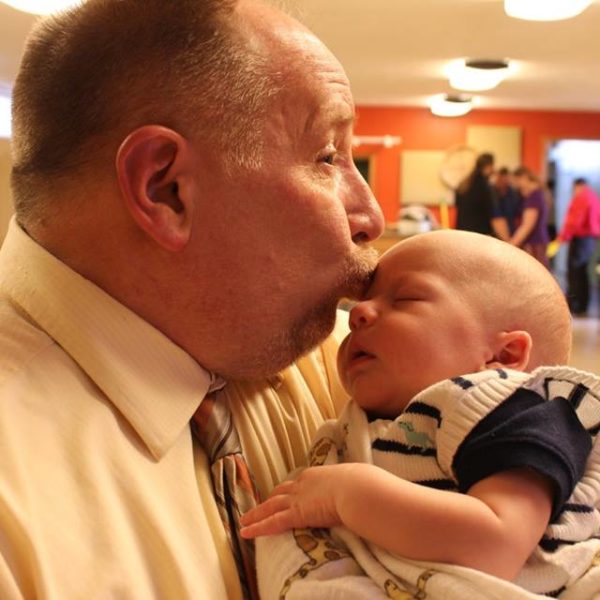 Pastor Jeff Martin of The Refuge, in Chetek, Wisconsin is now also the Mayor of Chetek! He has just stepped into this new role, which as you can imagine, is an exciting time. But why run for office in your town? Well, Jeff shares his heart, humor, and journey over on his blog. Go over to his blog and read more about his journey!